High strength and earthquake resistance, compressive strength. The stamps are selected in such a way that the material can perform a bearing function. Therefore, all have the same strength indicators.

Flexural tensile strength. Foam concrete and aerated concrete are brittle materials. They do not have a very important quality - flexural and tensile strength. Therefore, even a small deformation of the foundation can lead to large cracks in the entire structure, and not at the seams, but on the blocks themselves. While polystrolbeton in its properties of elasticity and elasticity is similar to wood.

Frost resistance - the ability to tolerate repeated alternate freezing and thawing in the most water-saturated state without loss of strength. Therefore, the high water absorption and the porous-capillary structure determine the low frost resistance characteristics of the foam and gas block. In contrast, polystyrene concrete has very high indicators of frost resistance, just because the material does not absorb moisture even when it freezes/thawing does not cause damage to the material.

Water absorption. This parameter is very important because it directly affects almost all the characteristics of the material: strength, durability, thermal insulation, microclimate, and more. The gas block has the worst results due to the open pore structure(capillary structure), the foam block has a slightly better indicator due to the closed pore structure. In polystyrene concrete, such a low water absorption rate is determined by the formula that lies in its composition: foamed polystyrene does not absorb moisture, the presence of wood resin has a waterproofing function.

Earthquake Resistance. The inability of foam concrete and aerated concrete to withstand bending loads suggests that the seismic resistance will be at a very low level - in an earthquake, the block with a very high probability will be covered with cracks and faults, which can cause the collapse of the entire structure even at a weak magnitude. The seismic resistance of polystyrene concrete is from 9 to 12 points. With its high elasticity, the unit can withstand high vibration loads. According to its properties of elasticity and elasticity, polystyrene concrete is similar to wood. A simple example of testing blocks: drop from a 2-meter height.

Ecological compatibility. The environmental friendliness of foam concrete depends for the most part on the foaming agents used. When using high-quality foaming agents, foam concrete will be environmentally safe. Aerated concrete is quite an eco-friendly material. However, the use of aluminum powder as a gas-forming agent (even if aluminum is in a bound state in the finished material) can negatively affect the environmental friendliness during operation. The polystyrene concrete uses eco-friendly materials: water, foamed "food" polystyrene, cement and wood resin.

Fire safety. All the materials under consideration have a group of flammability - NG (non-combustible).

Ease of operation. Aerated concrete, like foam concrete, is a fragile material. To install the doors, it is necessary to lay a concrete layer in the openings. Poorly hold fasteners, crumble. They can give cracks/fractures on the block itself. At the same time, polystyrene concrete, due to the tensile strength during bending, does not crumble, perfectly holds the fasteners. It is well processed.

Cost of the material. Initially, the cost of polystyrene concrete is higher - due to the higher cost.But this disadvantage is leveled during the construction process, when funds are saved on insulation, hydrophobization, noise insulation. 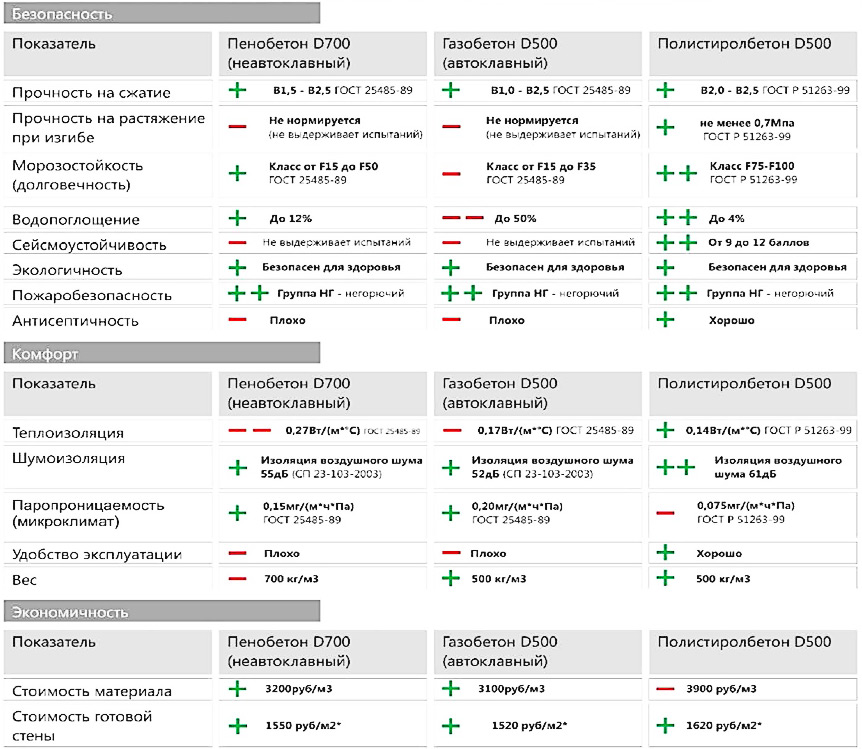